A cowboy town that was old Penang - Penangâs History, My Story By WONG CHUN WAI

Old architecture: Cantonment Road in Pulau Tikus was probably named after an army camp in the area. It intersects with Burmah Road and Kelawei Road.

GUNS, cannons, bullets and mercenaries — these were the essentials in old Penang and a number of roads have kept these memories alive.

Magazine Road was named after the government gunpowder depot, which was formerly located at the present Gama supermarket.

According to Boon Raymond, who blogs about the streets of Penang, the Chinese used to call Magazine Circus as Goh Pha Teng to refer to the “five arms gas lamps” that stood there.

To the older Penangites, it was also commonly known as Cheng I-Oh Keng which means gunpowder store or armoury.

Little information is available on the functions of the armoury but Penang must have been some kind of a cowboy town.

Then, there is Cannon Square, near Khoo Kongsi, where a cannon shot was fired during the secret society fights known as the Penang Riots of 1867.

The one personality who found his place in history, and on the streets of Penang, was businessman Khoo Thean Teik — of which Thean Teik Road was named after. 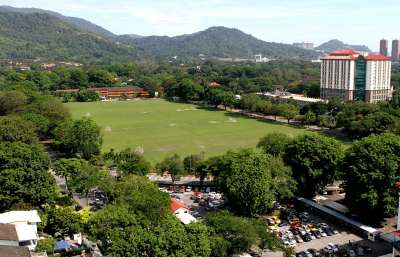 Park for all: Polo Ground is popularly used for football matches.

Thean Teik, literally translated as “heavenly virtues”, was said to be the leader of a notorious triad.

At the age of 34, he established himself as the Big Brother or tai kor, and when the riots broke out, he was convicted for instigating them.

At that time, he was also a director of the Khoo Kongsi, the clan house of the Khoos, but that did not stop the authorities from sentencing him to death.

But Khoo had enough clout and influence. The British colonial government feared that his execution would led to another riot and quickly reduced it to life imprisonment. But he was released after seven years.

He made his fortune and prospered by buying up vast tracts of land at what is now known as Thean Teik Estate.

Much of the money came from immigrant labour trading and opium distribution, permitted by the British. In Perak, he was involved in gaming and pawn-broking, which made him even richer. 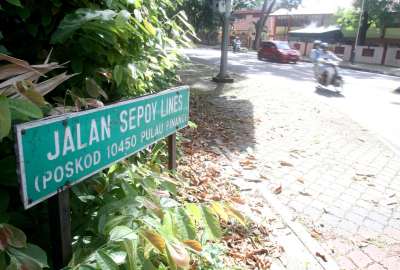 Honoured : Sepoy Lines Road is a tribute to the Indian soldiers brought in by the British.

Given the circumstances in old Penang, the British realised it had to beef up its army to ensure peace, or rather, control over its territory.

Sepoy Lines Road, located opposite the Penang General Hospital, was where Indian soldiers hired by the British colonial government used to stay.

They were known as Sepoys, a Persian word for infantry soldiers, in the Mughal Empire and in the 18th century, they were hired by the British East India Company, which was then making its foray into the East.

In one entry in Wikipedia, it claimed that over 80% of the East India Company’s 300,000-strong army were from India.

In Penang, the barracks of the Sepoys were located there while the British soldiers stayed at the nearby Barracks Road, near where the Penang Prison is.

Not far from Sepoy Lines Road, is Cantonment Road located in the district of Pulau Tikus.

As the name suggests, there used to be an army cantonment or camp there.

But it is the Polo Ground field adjacent to Sepoy Lines Road that is of interest as a landmark to Penangites.

My Story By WONG CHUN WAI