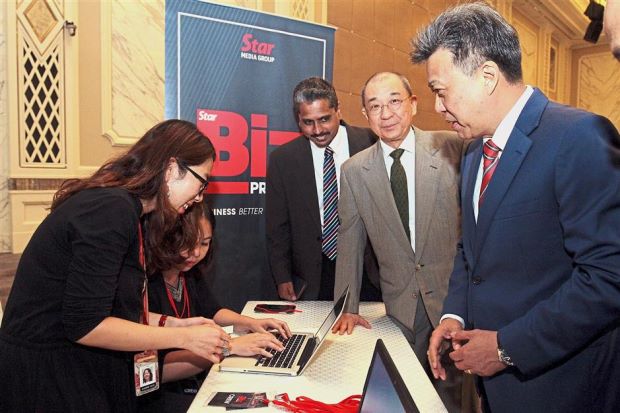 First to sign up: Waterfront Capital Group chairman Tan Sri Chua Ma Yu (second from right) was the first person to sign up for StarBiz Premium during the launch yesterday at St Regis Hotel. With him are Star Media Group CEO/MD Datuk Seri Wong Chun Wai and The Star specialist editor M. Shanmugam.

He projects the country to register a gross domestic product (GDP) growth of 5.3% next year, in line with global economic recovery.

“Global trade is anticipated to continue its encouraging momentum next year and export-oriented economies such as Malaysia would do well, moving forward.

“Looking at the historical trend, as overall trade and domestic demand continue to strengthen, private investments in Malaysia are also likely to grow stronger in 2018,” said Chua in a panel discussion during the launch of StarBiz Premium yesterday.

“As Malaysia’s GDP growth in the first three quarters of 2017 has trumped expectations, it may be slightly difficult to keep up with a similar performance next year.

“That said, this does not paint a negative picture of the country’s economic outlook in 2018 as a growth of 5.3% can still be considered as positive,” stated Chua.

In the third quarter of 2017, domestic economic activities expanded by 6.2% year-on-year, driven by robust private-sector spending and continued strength in exports. The Government recently revised the full-year 2017 GDP growth forecast to between 5.2% and 5.7% from an earlier estimate of 4.3% to 4.8% on the back of an increasingly positive economic outlook.

Nonetheless, he expects China’s economy to grow at a commendable rate of 6.5% in 2018 and will continue to remain an anchor for regional growth next year.

“China and Asia ex-Japan will likely contribute about 60% of global growth in 2017. This year is turning out to be a year of better growth,” he said during the panel discussion.

He said China was likely to maintain its stability in the medium term. However, Lau said events such as the hawkish stance of the US Federal Reserve, tax reforms, inflation and geopolitical issues could prove disruptive to the economy. It is estimated that China will import US$24 trillion worth of goods, attract US$2 trillion inbound direct investment and make US$2 trillion of outbound investment in the next 10-15 years.

Lau also disclosed that manufacturers were relocating their operations as it moves up the manufacturing value chain and to counter rising costs in China.

“Asean remains the favoured destination for relocating production outside China,” he added.

Additionally, he said the rising volatility could have spillover effects and has increasingly affected Asean currencies. He noted that the renminbi was currently in a balanced position, without having to depreciate the currency like two years ago.

On the housing bubble, Lau does not expect property prices in Hong Kong to correct anytime soon.